I started with trolley runs — a disaster because the dogs weren’t protected against strays, thieves, or neighbor kids.  And when they got off the trolley they were FREE. And they ran-ran-ran because they were FREE!!!!!

Then I fenced in with 4′ wire — an improvement, except for the dogs who went OVER the 4′ wire, so then added 6′ wire. But hadn’t fenced AROUND the house and had to leash walk the dogs in and out.  That ended soon and I started the first “yard” off the back door… Since then the house is surrounded except the driveway. But we were still on DIRT for many years, and then gravel — which becomes mud — and it was all basically just a backyard.  There aren’t a lot of pictures until 1995 when I built my first actual kennels.

I dumped gravel, wheelbarrowed it to the sloping area behind the house, smoothed it very roughly, and laid the blocks on top of the gravel.  The kennels were 6’x6’x20′.  This got the dogs off dirt (mostly) provided shade, and separated them when the girls came into season.  But the block (and kennels) eased downhill towards the house over the years.  Also all the runoff water from kennel cleaning went straight for my basement and any mess in the kennels ended up in the walkway on the downhill side of the kennel.  I tore these down when I bulldozed the backyard in 2006. 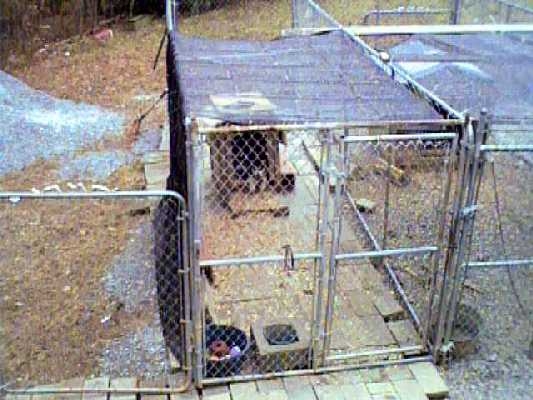 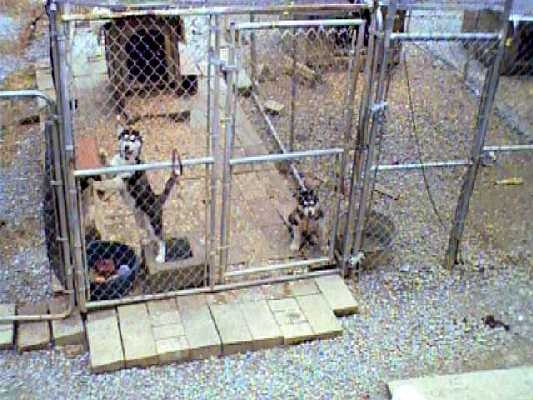 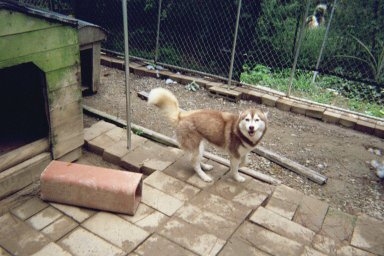 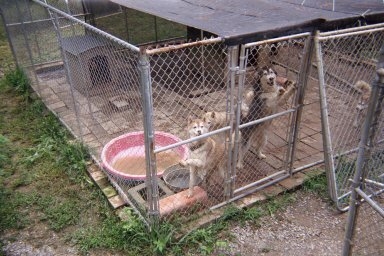 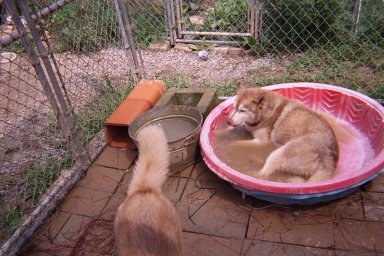 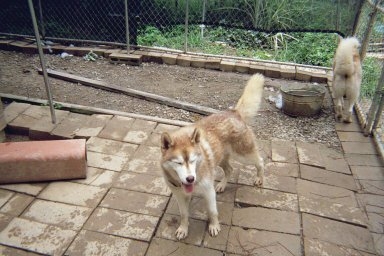 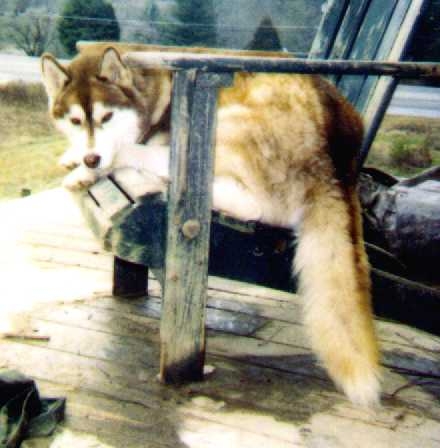 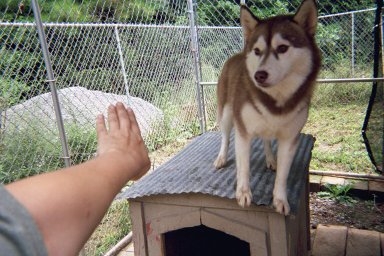 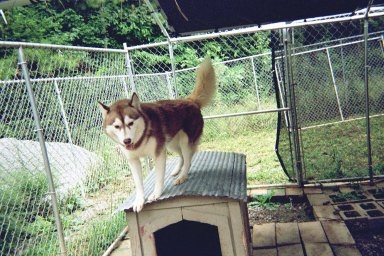 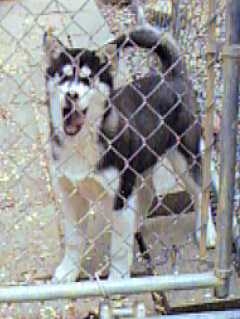 1999, South of the house (would become Uphill kennels)

In 1999, I built 4 ea 5’x8’x40′ kennels with permanent wire fences, gravel, and still on a slope.  I terraced each 10′ with a crosstie or landscape timber to help hold gravel uphill.  Gates were still on the downhill side of each kennel run.  This really helped provide much needed space.  Put them under the pine trees to help with summer temperatures.  But the gravel needs to be replaced constantly so it was still muddy.  And each time we added gravel, the fences got shorter. 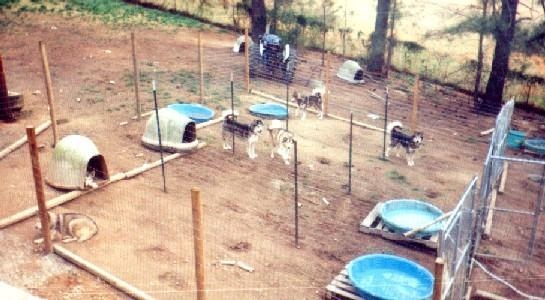 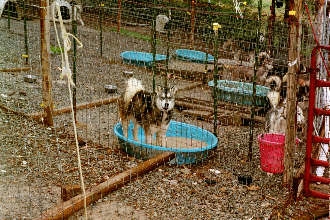 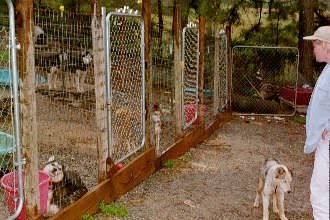 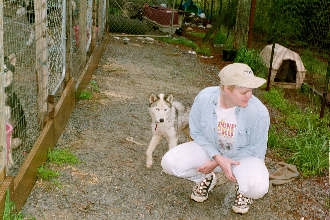 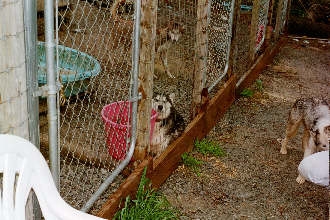 Then we added shade across the top of the kennel runs: 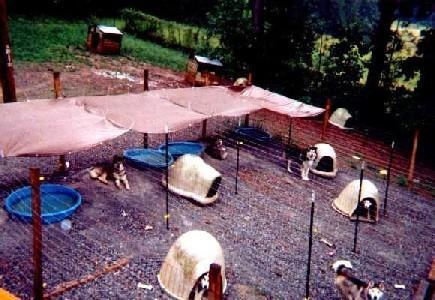 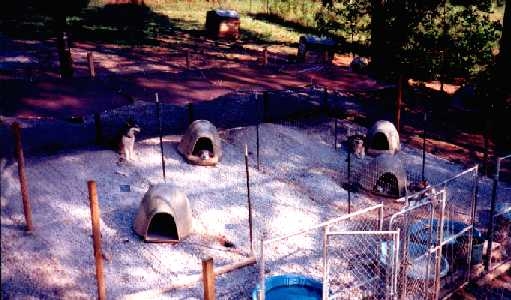 When the brush fire hit straw and cedar shavings and 60 years of pine needles, the flames went 20′ high.  Thanks to volunteer fire fighters the house was saved, but we had some major work to fix charred wire and kennels and tarps. 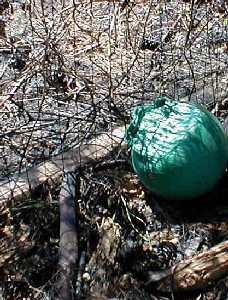 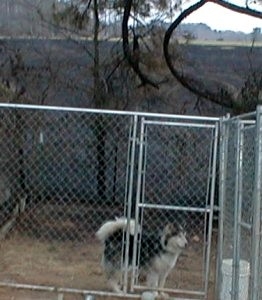 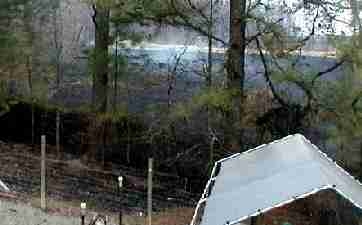 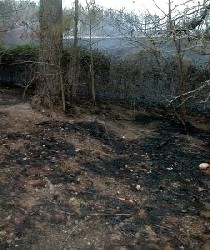 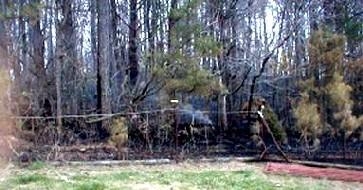 So we needed to remove the dirt and the absorbent materials that were also flammable.  We put block in the kennels… we had added a LOT of gravel over the years and the block was 4″ thick and top of more gravel, so the fences (permanently in the ground) were now sometimes only 4′ tall in places. 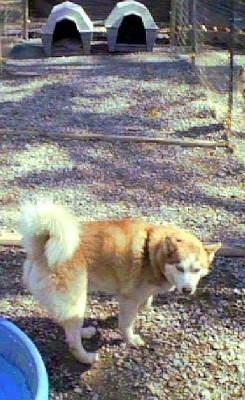 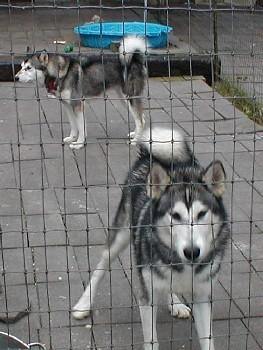 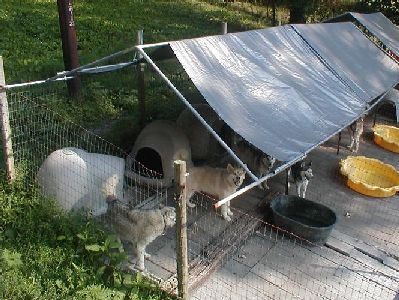 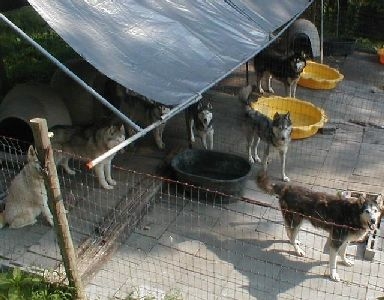