There are NO significant differences in coat color or coat pattern between the breeds. Grays, Blacks, Agoutis, Silvers, Reds, Sables, and Whites occur in both breeds.  Asymmetrical, splash, or piebald colors also occur in both breeds, although discouraged in Malamutes.

Malamutes & Siberians are NOT the breeds for everyone.  But they are beautiful, outrageously affectionate, clever, universally friendly, and natural clowns.  They will insist on having a relationship with you and will never settle for just being yard ornaments.

Please do NOT expect slavish obedience.  Even in an obedience-trained northern dog.  Part of their charm is their free-thinking, and sometime free-wheeling, attitude. You might get the focus and responsiveness you desire, if you train consistently, if you remember to make training fun, if you quit BEFORE the dog is bored.  And then they are going to pull something out of thin air.  Just to see what happens.  These dogs are always thinking.

For instance, Tosha decided in the Spring of 2000 to change her routine. She decided she didn’t LIKE being fed in IN her crate. She wanted to be fed OUTSIDE her crate. This is a non-confrontational female, but she is also 10 years old, epileptic, my “starter” Siberian, and Royal Queen of Everything. Tosha refused to crate with everyone else. So I took hold of her collar, she spun like a dervish until I let go, and she got away.  I decided I can outwait a Siberian stomach.  She watched me for three days:

After 3 days she crated up willingly and ate.  Since then she has decided it’s a game. She goes into the crate every time she sees an open door. Then turns and grins at me and bolts out of the house, running lickety-split around the dog yard, then comes back so hard and fast, she’ll rock the crate when she torpedoes into it.  I’m rolling on the floor laughing, and I haven’t got the foggiest idea what happened. She decided to go in the crate. She had decided she wasn’t going to go in the crate. If you are waiting for an answer, there isn’t one.  I’m sure she had a reason, I’m sure it makes sense to her, but danged if I know what it was.

Tosha and I also have an understanding, after years of negotiating, that if she sees an open door (or a door that might be willing to be open, or a door that once was open and could be persuaded to be open again) she will do everything she can to slip out.  I will have a mild heart attack and go get the truck and follow her until she wants a ride home — at which point she will come back to the truck and sit, waiting for me to open the driver’s side door so she can hop in.  (Understand I HATE this situation and it will probably kill her eventually.)  No screaming hysterics anymore, no threats, because she’ll just lay her ears back and run faster to escape the noise. Because there is a basic truth about these two breeds:

They were bred to be stubborn. They were bred to go in one direction for 100s or even 1000s of miles. Their job was to lean into the harness and pull and run and pull and run. They have zero road sense. They have zero car sense. If you leave a Malamute or a Siberian loose in your neighborhood, keep the phones numbers for rescue and Animal Control and the road Supervisors very close because your dog will go out in the neighborhood.  He will overturn your neighbors’ trash.  He will chase down and kill neighborhood cats, chickens, goats and sheep.  He WILL get on the roads. 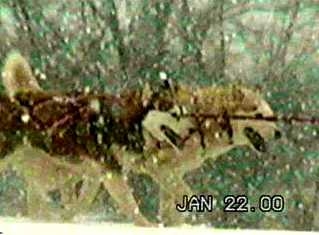 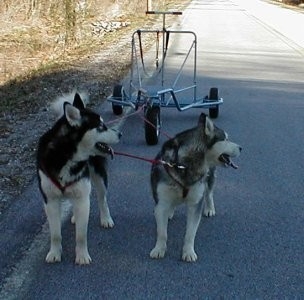 Your dog may be fine the first time you allow him off leash in the yard. He may come back to you promptly every single time no matter how interesting the smells or squirrels. That is, until he hesitates, just once, and the car hits him. These are sled dogs.  Not porch dogs.

And they really want to be housedogs.  They are smart and they bore easily if they aren’t allowed to lie at your feet. Malamutes and Siberians require quality time from their owners and should belong to someone willing to devote that time for socialization and training.  They need to be a part of the family as any other family member and should be treated as such. They are great companions when living in the right environment. Devoted, intelligent, goofy — what more could anyone ask for in choosing a dog?

Reprinted with permission, Chuck Gerson on Malamute-L who wrote: “It seems like almost anything a Malamute does is cute, amusing, enjoyable, or gratifying to the owner in some way. For example:

The same applies to Siberians.  They are not “easy” dogs. If you are not prepared for a dog to come in and “take over” don’t look to Malamutes or Siberians.

Rose Wier wrote, “These two breeds are like having a two-year-old around for an extended time. Vigilance vigilance…”

The Alaskan Malamute and the Siberian Husky have a lot in common, but they are not the same breed.

Malamutes are usually 65-95#.  Siberians 35-60#.  There is some overlap for small Mals or large Sibes. Mals are the arctic TRUCKS, designed to haul heavy weights.  Sibes the RACE cars, designed to pull light loads very fast. For a Malamute, picture a Siberian on steroids — bigger, stockier, more muscular, usually shorter tempered.  Their muzzles are heavier, their ears set further down the head, and their bones larger.  All of these things are relative depending if you are looking at a small Malamute or a large Siberian.

Malamute eyes are shades of brown, from gold to nearly black — this is important because pet stores mix up AKC papers and people who fake the papers won’t back off their claims of blue-eyed Malamutes — but a blue-eyed dog is not a purebred Malamute. Siberian eyes can be brown, or blue, or one of each color, or both colors in the same eye.

They were both bred to pull sleds, but under difference circumstances and by different peoples.  The Siberian Huskies were bred to be large-team, moderate-speed, moderate-weight sled pullers by the Chuckhi in northern Eurasia (Siberia).  The Alaskan Malamutes were bred for smaller teams, slower speeds, & heavier weights by the Inuit/Malamutes in North America (Alaska).  Both had to survive inhospitable conditions, so they have developed a tough intellect to suit these tough conditions. This intellect is not necessarily obedient.

A dog with “robot-like” responsiveness would mush out over thin ice because the dog driver told him to do so — and he wouldn’t live to reproduce that genetic characteristic for blind obedience.

Malamutes are bigger, stockier, and harder headed (many will argue the fact, but a dog that weighs 75-85lbs learns he can be harder headed than a dog that only weighs 50lbs.) Both dogs can pull all day under load, but whereas the Siberian can pull a light load quickly, the Malamute pulls a heavy load steadily (and both breeds are built with those goals in mind).

As far as the pet owner is concerned, Sibes are generally better in a pack situation, because Malamutes can be same-sex dog aggressive to other dogs.  But Malamutes are generally calmer, because Siberians can be hyperactive.  Siberians have a longer life expectancy than Malamutes.

Both breeds bark.  Despite the myth to the contrary, they are not bark-less. They also howl, woo, yowl, ruff, grunt, groan, growl, sing, serenade, whine, growl, screech, moo, and yodel. Silence is not one of their virtues. Their lovely voices are one of the distinct and enjoyable traits — if you like canine operas (please check with your neighbors, landlords, and spouses — you’ll be surprised who doesn’t find this attractive.) However, Malamutes generally need a reason to make noise, and without a reason, they are (generally) quiet.

For a complete physical description of each breed look up the AKC breed standards for Alaskan Malamutes and Siberian Huskies. Also check out An Analysis of the Siberian Husky Standard by Three Breeder Judges.  For more on each breed’s mental qualities talk to breeders and other pet owners.  And please know that these breeds are not for everyone.

These are breeds that, while they can make the best pets on the planet, they require a serious and long-term commitment by anyone that chooses to be owned by one.