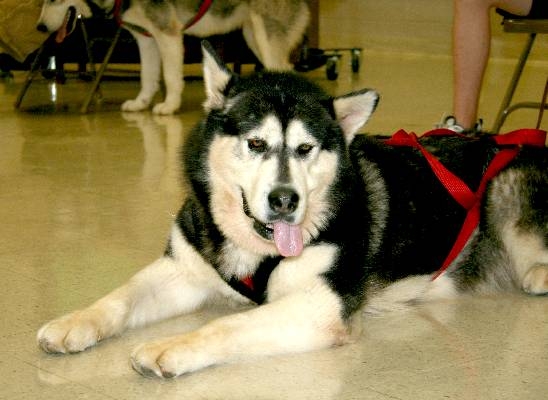 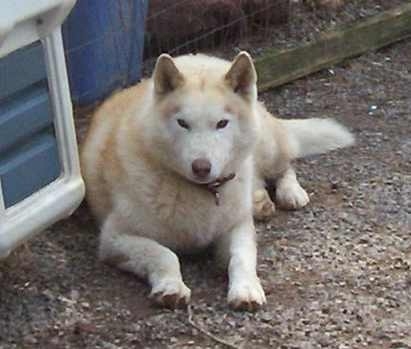 This page was written with help from employees and researchers at Wolf Park and Bays Mountain Park and members of many lists, including WolfDogList, Malamute-L, Sibernet-L, and Sleddog-L. All mistakes are my own.

Purebred Alaskan Malamutes and Siberian Huskies are not wolves, or part-wolves, were not bred from wolves, and these breeds were not developed by breeding to wolves anytime recently (that is a separate animal called a wolf-dog). Based on studies by Dr. Robert Wayne at UC Berkeley, sled dogs are no more closely related to wolves than Chihuahuas. There is very little genetic difference between any dog and any wolf, coyote, or jackal, etc., so little, in fact, that genetic tests cannot tell how much wolf is in deliberately bred wolf-dogs. The domesticated canines and their wild cousins CAN interbreed. However, pedigrees on Malamutes and Siberians are available back 20-50 generations (to the early 1920s at least) and these dogs are not wolf crosses — Malamutes are Malamutes, Siberians are Siberians.

The definition of Phenotype is “the genetically and environmentally determined physical appearance of an organism.” In other words, (the parents and) the conditions create the appearance.

The phenotype for Northern Breeds describes what works in the Arctic:

So any Northern Breed that did NOT have these specific characteristics would have a harder time surviving in the Arctic, whether it was a wolf or a dog.

Manipulation of the phenotype is nothing new for the domesticated dog breeds. We have manipulated every breed of dog for desired results.

In summary, environmental pressure has kept the Northern breeds close to the original phenotype. In the process we have tailored these dogs to their specific job, i.e. pulling in harness and living in human society. 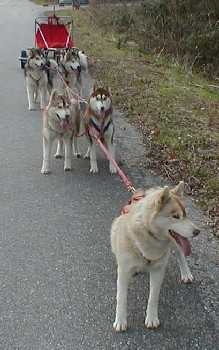 But the Malamute and the Siberian DID evolve past the original phenotype because of the changing environment — i.e., human society. Northern breeds are puppy versions of the wolf.  Compared to adult wolves, they have shorter & blockier muzzles, shorter legs, stockier bodies, larger heads, and they are smaller (with a few individual exceptions). Their behavior is also puppyish, i.e., submissive to humans, and generally friendly to other dogs (again exceptions).  These are important differences.  Dogs have been domesticated for thousands of years; at best, wolves are socialized or tamed, but they are NOT domesticated.

Wolves and Wolf-Dogs as Pets

We do not recommend that the Average Pet Owner keep a predatory carnivore as a pet, whether it’s a wolf, a lion, a bear (or crocodile) — even if they have been socialized or tamed for generations. We also do not recommend the average pet owner keep a wolf-dog as a pet. Both wolves and wolf-dogs require expert care and facilities and the AVERAGE PET OWNER is unable to provide either.

Wolves and wolf-dogs are not marauding killers, they do not carry children off into the forest and murder them, and they do not disguise themselves as Grandma and hide under the bed covers. But with the average pet owner they can be socially shy, aggressive, and “unpredictable” — this last is generally due to ignorance on the part of the owner on the differences between wolf behavior and dog behavior. Many people exaggerate the wolf-content of their wolf-dogs in a sort of macho arrogance. Unethical breeders often flat-out lie about wolf-content to boost the price of their “cubs.”

However, there are many people who have had exactly the opposite experience. Their animals were pets from the beginning, carefully bred for temperament, well socialized, obedience trained, and housed in special facilities — not your average neighborhood, 4′, chain-link, yard fence. These owners researched wolf behavior, prepared their containment facility, and were aware that they had an animal on their place that required careful handling. They are NOT the Average Pet Owner. They do not leave children alone with their pets, and they do not allow them to rampage through the neighborhood trash cans and cat population — good policy for any pet owner.

Q: Is it true that dogs are all equally related to wolves per genetic tests, that the Siberian is no more related than the Fox Terrier?

A: This is true. All dogs are “equally related”. It is believed that domestication of all breeds happened during the same era. However, depending on what humans needed from their animals, they selectively breed for very different traits. In the case of herding dogs, they kept the first part of the hunting instinct, but breed out the “kill” sequence.

Q: Is it true that wolves have no work ethic and don’t pull worth a darn?

A: This is generally true, however, I am sure that someone has an exception. Wolves are even more independent thinking than our wonderful northern breeds. We have selectively bred sleddogs for the desire to pull. This selective breeding takes many many generations of selective pressure. So yes, the genetic material for pulling exists in the wolf since they are the original material for the dog, but it has not been exaggerated as in the sleddogs.

Q: Is it therefore true that the Inuits (Alaskan Malamutes) and Chuckhi (Siberian Huskies) were very selective about their breeding because they were peoples who needed dogs to survive, not hobby breeders?

A: This is true. They were dependent on their dogs for survival, so dogs who did not conform to their needs did not survive and certainly were never allowed to breed.

Q: So a staked out female dog in heat would not be bred by wolves?

A: There are a number of concerns of feral dogs breeding with wolves, but most concerns are most likely unfounded. It is much more likely that the wolf pack would kill the dog rather than accept and breed with her. There have been instances of a staked out female breeding with a lone wolf. However, male wolves are ONLY fertile during the wolf breeding cycle, about January through March. Where the dog generally has two breeding cycles per year, wolves only have one which delivers pups in the spring for survival reasons.

Q: How many “pure” wolves are there?

Q: Would you recommend a wolf-dog for the average pet owner?

A: No. Not dealing with hybrids is probably the safest way to go. The rescue organization I have worked with in the past took each animal on an individual basis to evaluate, but we had several people who were very knowledgeable on hybrids. At Wolf Park we do not take the stance that no one should own a hybrid, but one needs to be fully educated on wolf behavior and containment to make a decision (See Wolf Park’s Dog-Hybrid Page). Our experience has been that the people who care enough to get educated generally do not get a hybrid.